How To Style Your Divi Cart Icon Like Shopify

WooCommerce + Divi is the most flexible and powerful ecommerce combo in the world. But small players like Shopify can be a fresh source for design inspiration. In this tutorial, we are going to style the Divi menu cart to look like the Shopify cart.
Subscribe on YouTube

WooCommerce was founded in 2008 under the name WooThemes. In 2015, WooCommerce was acquired by Automattic – the owners of WordPress.com. According to Statista, WooCommerce is by far the most popular ecommerce platform in the world with a market share of 37% (July, 2022). WooComerce is open source and free to install. Together with the 25(!) WooCommerce modules from Divi, it’s the perfect choice for most ecommerce websites.

Shopify was founded in 2006 and has a 10% market share. Since Shopify is a hosted ecommerce platform, you can’t choose your own web hosting. Shopify apps can be pricey and there is no free option. You can’t use the +50 000 WordPress plugins and you have less options for customizations, payment gateways and SEO.

With that said: Shopify has a nice design focus. One example is the Shopify menu cart that looks more modern then the default Divi menu cart. So lets recreate the Shopify cart icon style using Divi and WooCommerce!

Dawn is the most popular theme for Shopify. It uses a minimalistic shopping bag as cart icon with a overlapping bubble that displays the cart quantity. A nice detail is that the cart quantity “0” is hidden when the cart is empty. The cart has a subtle expanding hover effect. Can we achieve all this using Divi? Let’s try.

The Shopify theme Dawn with a nice minimalistic cart icon in the menu.

Desktop menu with the menu cart inspired by Shopify.

Mobile menu with the menu cart inspired by Shopify.

First, you need to create a Theme Builder header template and make it display the cart icon and the cart quantity number.

That’s it! The final result should look like this:

Don’t worry if you still see the text “Items” in the Theme Builder view. If you followed the steps above, the “Items” text will be gone in frontend.

We’re getting closer to the Shopify cart style. Let’s add a nice round background to the cart quantity number and make it overlap the cart icon.

Play around with the margin-left and margin-bottom values to adjust the position of the cart quantity bubble. Do you want to add a white border around the circle? Check out the tutorial How To Add A Circle Background To The Divi Cart Quantity Number.

We are going to use a little CSS snippet to change the default Divi shopping cart icon to a shopping bag icon á la Shopify.

That’s it! Clear your cache and preview in frontend.

Check out the tutorial Change The WooCommerce Cart To A Custom Icon Or Image With Divi and choose from over 300 font icons. Or why not use a custom cart PNG or SVG image?

The Shopify cart does not display the cart quantity “0” when the cart is empty. Let’s add the same behaviour to the Divi cart!

We are going to add a snippet to the functions.php file. To avoid that the code is overwritten next time you update Divi, you need to have a child theme installed. If that isn’t an option for you, you can use the free plugin Code Snippets instead.

Save and preview in frontend. You might have to clear the website cache, browser cache and Divi Static CSS cache before you can see the changes in frontend.

When you hover the Shopify cart icon it expands a little. I’m not a huge fan of this specific effect since it’s a bit jumpy, but hey, I promised you a Shopify cart so here we go.

That’s it! Increase the 1.10 value for scaleX and scaleY to increase the expanding effect and vice versa.

The Result: A Divi Cart Icon Like In Shopify

Now we have tweaked the shopping cart icon in the Divi menu to get the Shopify cart style. The result should look something like this:

Desktop menu with the menu cart inspired by Shopify.

Mobile menu with the menu cart inspired by Shopify.

That’s all for today!

👉 Related post: How To Paste Unformatted Text By Default In WordPress

👉 Free course: Create a website from scratch with Divi

Try today and get your money back within 30 days if you are not satisified. 100% Risk-Free. 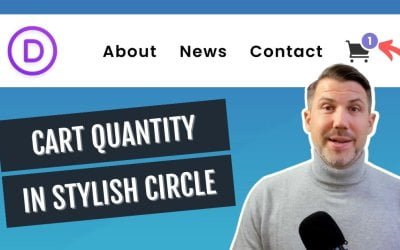 Let’s give the default Divi menu cart icon a more modern look by adding an overlapping circle background to the cart quantity number.

END_OF_DOCUMENT_TOKEN_TO_BE_REPLACED

Spice up your WooCommerce menu by changing the default Divi cart icon to a custom font icon or a custom image icon with a little bit of CSS.

END_OF_DOCUMENT_TOKEN_TO_BE_REPLACED 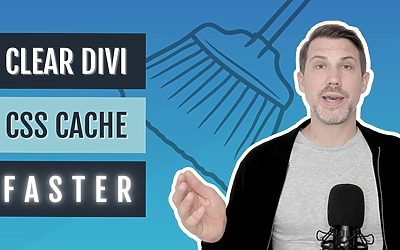 Clearing the Divi Static CSS File Cache is a quick way to fix several design issues in Divi. Here are my favorite tricks on how to speed up that process with a few hidden methods.

This site uses Akismet to reduce spam. Learn how your comment data is processed.

Get the latest tutorials, layouts and news from DiviMundo. You can unsubscribe at any time.

All content on DiviMundo is funded by you – our beloved readers. Some of the links are affiliate links. This means that if you click on the link and purchase something, I will receive an affiliate commission. But it will never cost more for you. Thanks for your support!

This website uses cookies to improve your experience while you navigate through the website. Out of these, the cookies that are categorized as necessary are stored on your browser as they are essential for the working of basic functionalities of the website. We also use third-party cookies that help us analyze and understand how you use this website. These cookies will be stored in your browser only with your consent. You also have the option to opt-out of these cookies. But opting out of some of these cookies may affect your browsing experience.
Necessary Always Enabled
Necessary cookies are absolutely essential for the website to function properly. These cookies ensure basic functionalities and security features of the website, anonymously.
Functional
Functional cookies help to perform certain functionalities like sharing the content of the website on social media platforms, collect feedbacks, and other third-party features.
Performance
Performance cookies are used to understand and analyze the key performance indexes of the website which helps in delivering a better user experience for the visitors.
Analytics
Analytical cookies are used to understand how visitors interact with the website. These cookies help provide information on metrics the number of visitors, bounce rate, traffic source, etc.
Advertisement
Advertisement cookies are used to provide visitors with relevant ads and marketing campaigns. These cookies track visitors across websites and collect information to provide customized ads.
Others
Other uncategorized cookies are those that are being analyzed and have not been classified into a category as yet.
SAVE & ACCEPT
Powered by